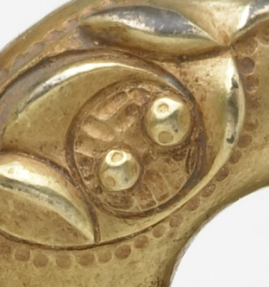 We all make mistakes. In academia, it’s sometimes tricky to hold your hands up and admit you got it wrong. But we did. We got it wrong. The long and short of it is that the Newark torc is not sheet-work as we previously thought and wrote about, but is instead almost certainly a hybrid of sheet and cast technologies!!! Yup, you read that right. Cast and sheet!

Yesterday, we went to GE Inspection technologies with the Newark torc. They had kindly offered to x-ray the torc for us with a high-powered machine (it’s amazing what you can do with 3/4 million pound’s worth of 18 tonne machine). Prior to this, preliminary, lower power, scans had suggested that the relief elements of the terminals were hollow, as would be expected in a sheet-work torc. We had also noticed what appeared to be ‘apple core’ seams running around the terminal. However, once we got the torc into a high powered x-ray, although it was not immediately obvious, after looking at several different perspectives, it slowly dawned on us what we were actually seeing.

The relief was not hollow, but instead more filled and typical of a cast terminal. In addition, what we had assumed were the ‘apple core’ seams visible on the torc, in fact turned out to be a narrower ring of material, added to each terminal either prior to or after the casting of the main piece.

Rather more exciting, was the wire attachment to the collar and torus, which proved to be intricate and highly skilled and created a seamless joint to complete the terminal.

So where does this leave us? Were we wrong?

Well yes, we were, because Newark is not made of gold sheet-work (although the core element may well be more related to sheet than cast technology). What we had thought to be an ‘apple core’ was more complicated. However, the decorative link with Netherurd remains and we are still confident that the decoration was carried out by the same hand in both torcs (could we be looking at the same finisher? or was the Netherurd/Newark  maker skilled in both sheet and cast?).

This also opens up an intriguing connection with the Sedgeford torc: as we’d previously noted, this torc is almost identical in size to Newark (interestingly, the central terminal hole in the Newark torc is a little larger than Sedgeford and this may link with the central added ring we have witnessed in the Newark torc.)…but is very differently decorated, of a lower gold content and the wires appear to be attached to the collar using a complicated rivet attachment, which is not present on the Newark torc. In addition, as with all the other castings we have so far seen, the Sedgeford terminal casts are faulty, on both terminals whereas, even under high powered x-ray, both the Newark terminals appear to be flawless.

So, despite the fact we were wrong, intriguingly we now have a link, not just between Netherurd and Newark….but a kind of torc venn diagram that links Netherurd and Newark’s decoration, and Newark and Sedgeford’s technology. Watch this space. Torcs just got interesting…..Again!

If you want to read more on our torc work please see our Publications, Blogs and Lectures page

One Reply to “We were wrong!”