It is only recently that our work has identified a variety of different manufacturing methods used to create torus torcs. This in turn has led us to suggest that they may not have been made in East Anglia, as had been previously assumed. As such, a piece on the history of torc discoveries, and the various interpretations of what they were and how – and where – they were made, seems appropriate. Further details of our research findings can be found in  Publications & Blogs .

Our work suggests that this form may have developed in response to a limited amount of available gold, as various goldsmithing techniques appear to have been employed to ‘fool the eye’ and allow a limited amount of gold to go a lot further.  More bang for your buck, if you like.

These techniques include the use of thin sheet gold instead of casting and the coiling of wire to form solid looking, and yet hollow, springs in the neck rings. The creation of hollow sheet terminals which, from a distance – or perhaps even in the hand if full of wax, resin or even lead to give extra weight – would leave the viewer in no doubt that this was a solid gold item.

Torus torcs are torcs with doughnut (torus) shaped hollow terminals (usually created from three parts -a torus shell, core and collar), of the type represented by the Snettisham Great torc. There are only a handful of these torcs known to exist and  – although a multitude of different torcs exist on the continent – this particular style is a very British phenomenon, and the origins of its development are not fully understood.

The first torus torc found was the Netherurd terminal and was discovered, close to Peebles, by a shepherd boy in 1806. The hoard contained three torcs/bracelets, a torus torc terminal and 40+  coins. It would appear that all apart from one torc terminal and two coins were taken to an Edinburgh goldsmith to be melted down, whilst the terminal was retained by the landowner, William Lawton.

Some 18 months later, Lawton wrote to Sir Walter Scott, detailing the find on his land, and the first information regarding the Netherurd terminal came to light. Neither Lawton – nor, later, Roy Rainbird Clarke in 1955 or R. W. Feacham in 1958 – mention how the terminal was made but in 1934, M. A. Cowan wrote that he thought the terminal was cast, although E.T Leeds, writing earlier in 1933, does appear to have recognised its sheetwork construction as he describes the ornament having been achieved using the ‘repoussé’ technique. All assumed that this find was an import from southern England, finding it completely preposterous that such goldworking skill could exist in Iron Age Scotland.

From this time, with no other similar torcs yet known, this terminal was thought to be a sceptre head or some kind of ceremonial terret. Similar – but it has to be said far more robust – terret examples from the continent were used as parallels. Without a complete torc to compare it to, it is easy to see how they made this mistake. With the terminal found at Hengistbury Head in 1912 being seen as a linch pin head, these interpretations became accepted.

And so the picture remained for the next 35 years. However, in 1949, a rather unprepossessing and poorly made, ring shaped, artefact was brought to Norwich Castle Museum for identification. Found in 1947, the North Creake terminal was, thanks to the great observation skills of curator Roy Rainbird Clarke, recognised to have remnants of wires attached to the collar. Rainbird Clarke surmised from this that the ring must therefore be a torc terminal and that this meant that the Netherurd and Hengistbury Head finds were torc terminals too. But there was still no complete example of the type and so the precise form was still unknown.

It was only in 1950, when a young lad called Tom Rout [there will be more about Tom and his fellow ploughman, Ray Williamson, in a future blog] was ploughing a field in NW Norfolk that the next piece of the puzzle fell into place.

Rout was a ploughman employed on the estate of Sir Stephen Lycett Green in Snettisham on the NW Norfolk coast. Lycett Green had, to fulfill the need for more food after the war, converted fields previously used to grow lavender, into barley fields. This meant they had to be deep ploughed and this ploughing brought about the finding of one of the most well known hoards in British archaeology.

Tom was not the first person to find gold in the Snettisham ‘Gold Fields’ – that honour went to Ray Williamson in November 1948 – but Tom’s find was certainly the most impressive to modern eyes. On 17th November 1950, Tom’s tractor (a Fordson E27N pulling a Ransomes plough, for those who are interested in this kind of thing) dragged to the surface the Great torc and another twisted torc with a ring looped through the terminal.

Now, Rainbird Clarke had his complete torus torc and the Snettisham story began in earnest. Further torc finds were made in the ‘Gold Fields’ in 1968 and 1973. In 1965, the finding of a large section of the Sedgeford torc, also in NW Norfolk, further suggested an East Anglian concentration, but it wasn’t until 1990, when Ian Stead and the British Museum started excavating the Snettisham site that the bulk of what we now think of as the Snettisham hoards was found. This excavation also uncovered another torus torc, the Grotesque torc, or the Marriage torc as it was known then.

The style of art seen in all previously found torcs was known as the ‘Snettisham Style’ after a term coined by art historian and archaeologist, Martyn Jope. But the Grotesque torc was different and was in the earlier, ‘Plastic’ style. A further ‘Plastic’ style torc terminal, the Mini-Grotesque was found in Hoard F.

At around the time of the finding of the Snettisham torcs, the idea of all torc terminals being ‘cast on’- that is, manufactured using the lost wax method of casting, with all terminals cast directly onto the neck ring – appears to have become established. Although the casting on method was clearly used on a number of low quality, often faulty gold, silver and copper alloy torcs (which we believe were attempts to copy the higher quality sheetwork torcs), the use of the method in exquisite quality, higher gold percentage torcs was never questioned and those who work with gold appear not to have been consulted. Only Morna Macgregor, writing in 1976, recognised the hammered surface on the inside of the Netherurd torc, but even then described it as cast.

With the massive assemblage from Snettisham providing a large torc group for analysis, the focus for torc studies became firmly East Anglian, with torcs from other parts of the country largely unmentioned. And so Snettisham became the benchmark site for over 15 years.

However, in 2004, the missing section of the Sedgeford torc was found and, in 2005, a detectorist working in fields to the north of Newark in Nottinghamshire found a complete torc, apparently similar to that found from Sedgeford.

In 2009, the Blair Drummond torc hoard was found close to Stirling in Scotland, and in November 2016, the important Leekfrith torc hoard was found in Staffordshire. The pattern of highly crafted, Iron Age, gold torc finds was spreading countrywide. But still these finds were seen as exports from the south.

In May 2015, the Newark National Civil War Centre had acquired lottery funding to redevelop their museum and the Newark torc was coming home. In a chance conversation about replicating the Newark torc, Roland happened to mention that he didn’t think the torcs were made in the ‘cast on’ way that was traditionally assumed and so we started looking for evidence so that, if we were to replicate it, we could do it in the most accurate way.

Four years on, after a lot of research and having looking at every torus torc in the UK – and working closely with The Torc Collective – we have now identified three different methods (sheet, cast separately and cast-on) which further subdivide into five distinct types of torus torc terminal manufacture, and can confidently attribute the following torus torcs to these groups:

With several manufacturing methods now identified – and with so many high quality Iron Age gold finds from across Northern and Western Britain – the suggestion that East Anglia was the source of all Iron Age torc making is becoming far less sustainable. But if not East Anglia, then where? Our research aims to look further afield in the North and West, where gold sources and traditions of gold working may hold the answer.

We believe the Snettisham assemblage, for whatever reason, is a collecting point, a buried curation of torcs, and is certainly not typical of torc hoards across the UK. The highly variable quality and form and the wide ranging dates of the torc finds from Snettisham would suggest that East Anglia was not the birthplace of these torcs, but rather should be seen as a final resting place after a lifetime of use elsewhere.

But at present our understanding of Iron Age gold working and torcs is in its infancy and there is much to be researched: the source of the gold needs to be identified, those who worked the gold need to be understood, we need to know where they were working and who they worked for and, perhaps most importantly, we need to be able to recognise and understand the techniques they were using. We also need accurate dates and to move away from art historical dating to a method that uses a range of ‘cross-pollinating’ techniques and evidence including scientific techniques, manufacturing clues and art historical information. Only then will we start to understand the torcs. 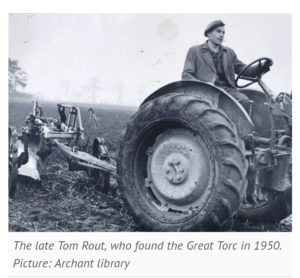 And so the task is great. But for now, like Tom Rout, we plough on…..watch this space for more as we find it!

Postscript: we believe there are several other examples of sheetwork torus torcs in the Snettisham assemblage that have been incorrectly attributed as cast but, until the long overdue publication of the Snettisham material can be interrogated, the current absence of a comprehensive list of finds and related contextual information for this site means that we will have to wait to be able to say more.