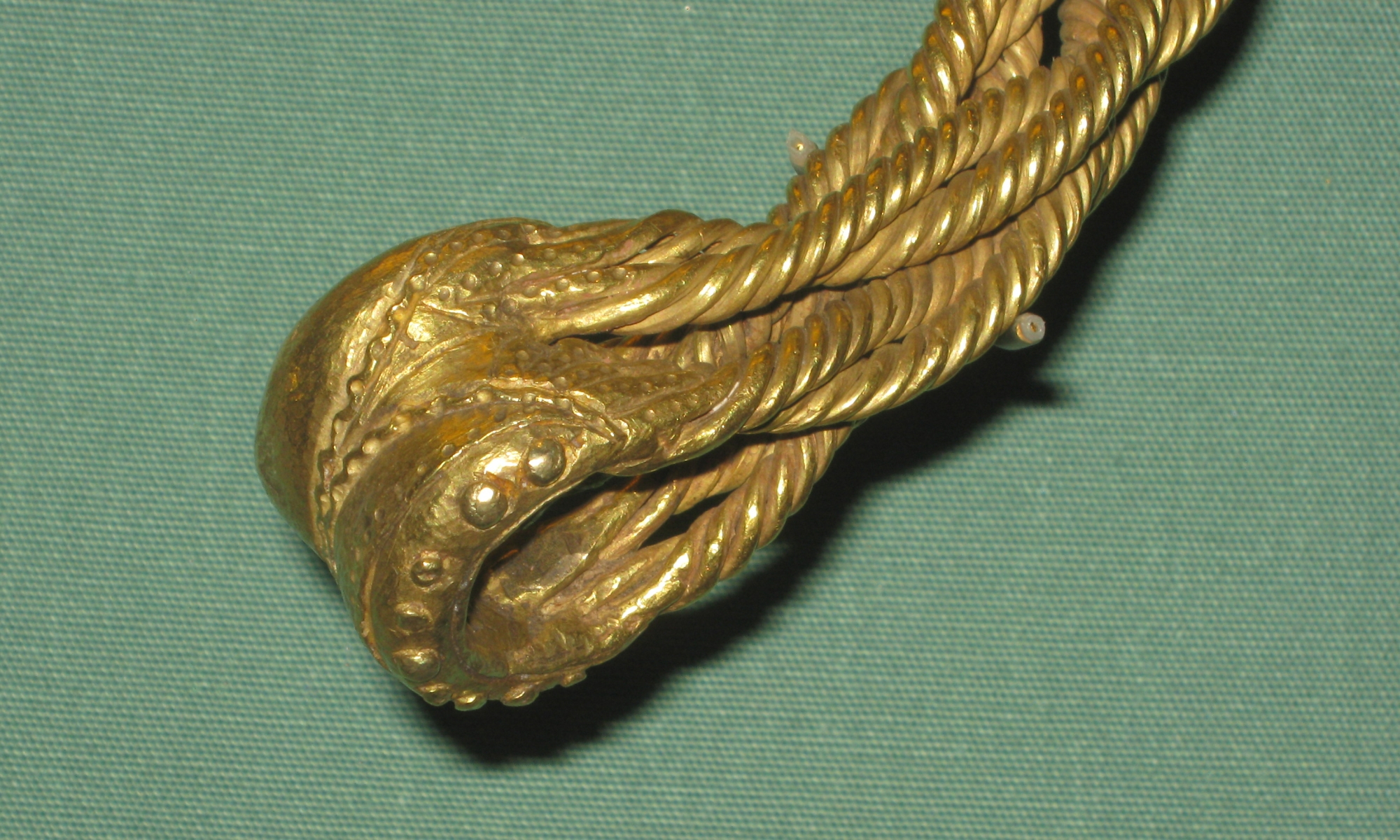 Snettisham inevitably – being the largest collection of torcs and torc pieces ever found and with the Great torc to the fore – tends to dominate the Iron Age torc world. It should not, however, be forgotten that there are upwards of fifty other torcs represented in other parts of Britain, when incomplete examples, or broken pieces, are taken into account. In addition, Snettisham appears to be a collection/curation point for torcs from many parts of the UK, and should not be seen as containing torcs of uniquely East Anglian origin. However, even with the spotlight on Snettisham, those torcs from Snettisham housed in Norwich Castle Museum, rather than in the British Museum, tend to be largely forgotten.

What follows is the first in a series discussing some of the lesser known torcs,  starting with what are known as ‘Cushion’ torcs.

These torcs were manufactured by adding molten gold alloy/solder/overcasting (we haven’t looked at any of these torcs closely yet, so can’t be 100% sure, although the addition of gold/solder in some kind of cast seems currently most likely) over the top of the wire neck ring ends to create terminals.

It is possible that this form developed in torcs with multiple wire strands, as one method to tidy up a lot of loose, and unsightly, wire ends. It is uncertain how these torcs relate chronologically to torus terminal torcs, although it should be noted that they are very much a hands on ‘molten alloy/casting’ solution to something solved in torus torcs with sheet metal and separate terminal casting. The design of these torcs results in the visual impression of the terminals being divided loops, perhaps mimicking the wound wire terminals of some wire torcs (see photo).

There would also seem to be a further method, seen in the Snettisham example below, which adds a fillet of alloy between two terminals to create one terminal.  Cushion torcs have previously been argued to be of a West Midlands/Staffordshire type but with only two examples of the type (from Glascote and Needwood Forest), and with the addition of the torc discussed below from the Snettisham hoard (which was almost certainly made/finished by the same person as Netherurd and Newark) and with the South West Norfolk torc appearing to be a cast copy of the form, we would currently reserve judgement on their manufacturing location.

The Needwood Forest torc (Images © The Trustees of the British Museum)

Found in 1848, in Needwood Forest, Staffordshire, this torc comprises 8 springs/twists of wire formed from two wires each. The method of creating the terminals is currently uncertain. The terminals are decorated with ‘pie crust’ zig-zags, punched dots and dummy rivets so familiar in torc decorative techniques of this period.

Discovered in 1943, and yet not recognised by the finder as a torc until 1970, this torc is made from 12 gold wires, twisted in pairs, and with the terminals then created with the addition of extra alloy, possibly by overcasting. Glascote is a very silver rich alloy, similar to that seen in the South West Norfolk, and Snettisham torc, below). The terminals are decorated with a ‘pie crust’ zig-zag decoration.

EDIT: Please see this blog for latest info about this torc.

Excavated as part of the Snettisham hoards (the precise find location will remain uncertain until the publication of the long awaited Snettisham volume) this torc, like Needwood Forest, comprises 8 pairs of twisted wires, with apparently two overcast/cast/cast on (we’re not sure yet) terminals which have then been turned into one terminal by adding a ring shaped fillet to join the two terminals. The fillet, and the collar, has been decorated with dummy rivet buttons with three dots on each rivet, and the spaces between infilled with punched lines.

These punched lines are of great interest, and clearly show the same technique and pattern as those seen on both the Netherurd and Newark torcs (see HERE for further information) and known as the ‘Newark-Netherurd pattern’. In addition, the added ring fillet shows remarkable similarity to the added ring fillet seen in an x-ray of the Newark torc. This will be discussed further in a forthcoming paper in Historical Metallurgy (for further information, please see HERE). We would therefore suggest that this Snettisham torc is a third example created/ finished by the same Netherurd and Newark torc maker. 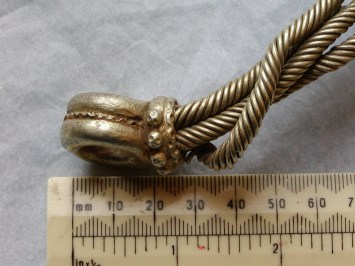 This torc, discovered in 2005, is slightly different to the torcs above as it comprises 4 wire springs, made of 6 wires in each. Although mimicking the divided terminals seen in all the torcs above and also showing the ‘pie crust’ decoration seen in both Glascote and Needwood Forest, the terminals of this torc appear to have been cast on, rather than overcast or created with added gold alloy. As such we would suggest, as has been suggested for several other Snettisham torcs (see HERE), that this torc may represent an East Anglian cast copy of the non-East Anglian form seen in Glascote, Needwood Forest and, the almost certainly curated, Snettisham torc above.

In addition to the torcs above, there are a number of examples from Snettisham that should be added to the category of cushion torcs. Their manufacturing origins are unknown, but there are similarities with all the torcs above. 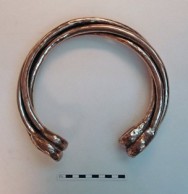 So there we have it: cushion torcs. Many questions are still to be answered about their precise manufacturing techniques – how exactly were the wires bonded into a terminal? – and the similarities – can we start to identify makers /workshops? –  and differences between each of the torcs. There would appear to be similarities shared by several cushion torcs and, for the Snettisham torc, a relationship with the Newark and Netherurd torcs in particular. But as with all things torc these cushion torcs are not simple!

We hope to examine these torcs in greater detail in due course, which will hopefully lead to some better answers. Until then it’s all up for grabs…