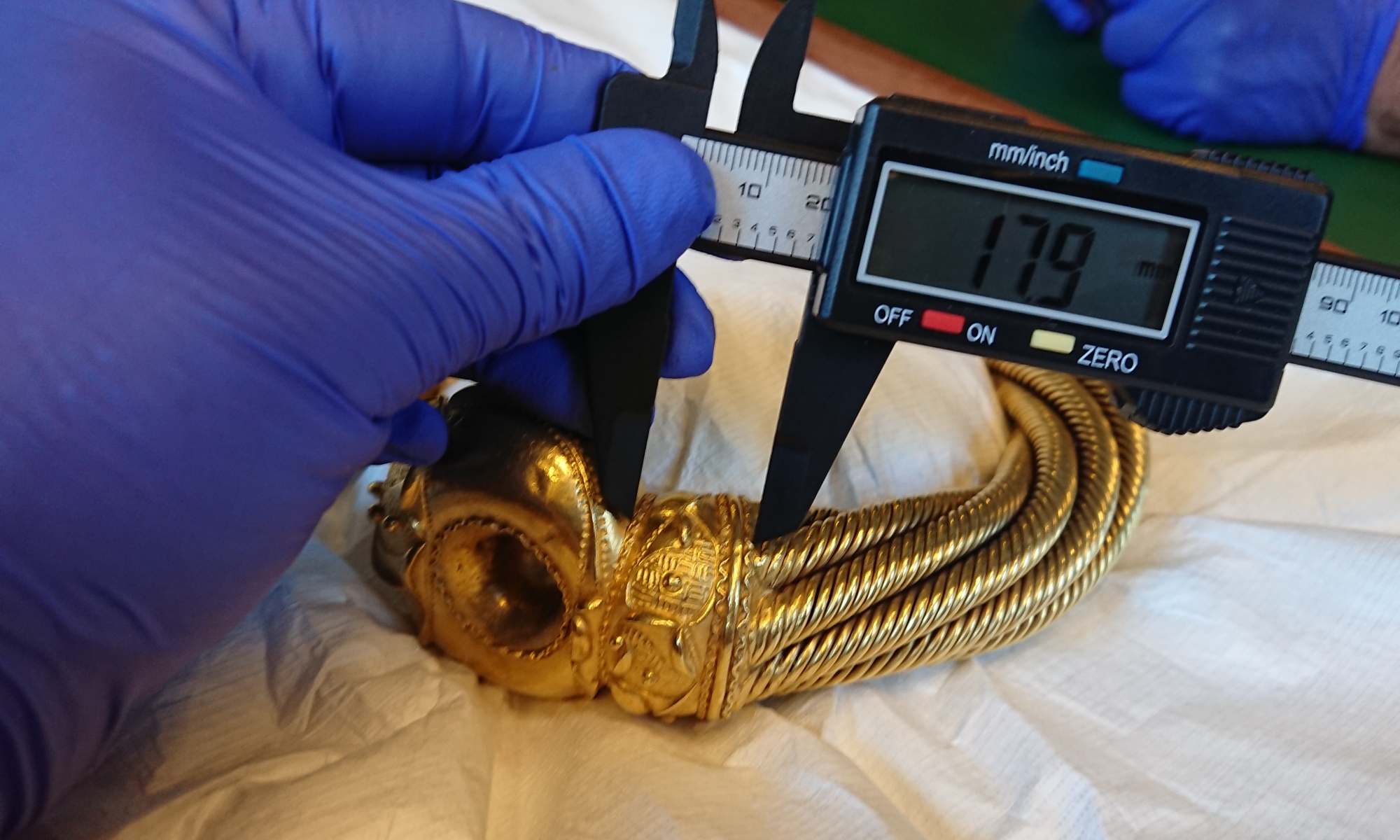 Part of the reason to commit our thoughts to ‘paper’ on the subject of torcs was that we have rather different approaches to the research to many in the field. I have a very much hands on approach which is tantalisingly difficult to achieve as you can’t really be too investigative with these delicate items! They are 2000 years old plus and are not always in the best of health and, rightly, deserve total respect. From the other end, at the researcher’s table, it’s a case of looking at patterns of find sites and decoration and this perhaps sits at a more respectful distance from the artefacts from what I have to do.

However, to unpick how they were made requires close observation – but not too close! It has to be stated from the outset that the original craftsmen and craftswomen often made these items to perplex the viewer.

They were (by and large) blatantly beautiful  objects, but to the human eye, the gold worker went to great pains to obscure how these items were actually made. They achieved this end by using (it goes without saying) no extra lighting or magnification – only the genius of the mind, deft use of the hands and a human pair of eyes. That rather sidelines all the years of experience that they injected into the project, but the finished item worked as a whole and was by far and away more than the sum of its parts.

These Iron Age craftworkers were limited by the metal in their hands but not the scope of their imagination. So much so that the final forms confounded some of the best minds in the world of Iron Age research for decades. We have resources of great technical ability and yet despite all this very expensive investment in big gadgetry, the gold workers, through shrewd use of technique, pulled the wool over the eyes of researchers for decades. I would love to think that they would have taken massive pleasure in knowing this.

In part, this is because the torcs were revered rather than being investigated. Long before the electron microscope or the x-ray was introduced into the mix, the torcs – particularly from the first finds at Snettisham – must have had magnifying loops and glasses passed over them time and time again. But it seems that what was being recorded was the design and pattern in as much to try and place the torcs into a timeline of ‘British Art of the Iron Age’.

Luminaries of the pre-Roman and Iron Age pored over the finds with the Great torc being obviously at the centre of much wonder and spectacle. It does this rather well, it has to be said, but I do think this blind-sided the experts. In part this is exactly what the original crafters wanted and needed to happen. It was an object that was peerless and was never meant to be questioned as to how it was made. Its job was to be splendid.

We have, in jest as much as anything, said often on Twitter about torcs and all things Iron Age to “Show us your backsides…”. This works on various levels but it speaks of an undeniable truth, in that the clues or answers to how an artefact was constructed are often hidden on the reverse or the inside. This is not to undermine the ability of the craftspeople but to illuminate an area that literally gets little daylight shone onto it. And it’s where the answers lie. I have vainly cried out for years that museums display items with a small mirror behind them so we can appreciate the main event on one side – and the cunning techniques used to craft a piece – by being able to view the reverse.

One of the more curious aspects of such a desire to see into ‘the areas that were not meant to be seen’ lies with the Great torc and an odd episode which must have occurred soon after its discovery in 1950. First I have to drag the story back up to 2017, when we were granted the chance to view the Great torc in person at British Museum. It was taken off view in the galleries and handed over to us in the Research Rooms where we pored over it for about two hours.

It was handed over reverentially, sat on acid free tissue paper, in a tray. We were, rightly, not allowed to lift it unnecessarily and it was suitably propped at all times for the most sensible of reasons. This torc is, after all, unique and irreplaceable. I suppose what is pause for thought, is that it spent years being handled by its Iron Age users and was furthermore ploughed up – along with a bracelet and smaller torc looped together – almost without any damage at all, but we are now reduced to handling it not with kid gloves but colourful Nitrile ones.

I can’t recall now, but at some point I remarked that there was a small triangular area that had a black gummy boundary to it when viewed under x4 magnification. It’s not a lot of black gummy, but it really is there. It’s a region only some 3mm x 4mm and made no sense at all. It just didn’t fit any lines of enquiry. So we moved on…

As per all torcs we have seen to date, we took many photographs to try and capture all aspects of the finest torc in the UK, before it was whisked away to be placed back into its ‘torcarium’, to reign in splendour over all the others. I have to add that two hours is plenty as beyond that you begin to suffer from being swamped with information. It’s time to retire and to try and not think about torcs!

Retracing our footsteps, (this is not an unusual aspect of research for us), Tess was looking online at a page of a 1950 edition of the Illustrated London News. There was a big article admiring the finds from Norfolk and it goes without saying the Great torc was without doubt the star of the show.

Tess noticed that the Great torc recorded here in black and white, in the magazine, was not complete. It had a triangular hole in one of the terminals – an imperial sized hole of a little under a quarter of an inch. After much to-ing and fro-ing, it was certain; it had come up out of the ground with a hole in the side, which really is not there now – hence the black gummy!

Between 1950 and 2017, someone had fixed it (and rather well too), and never recorded the fact. This had eluded all the researchers of recent vintage and they are a venerable bunch. It came as quite a revelation to the assembled crowd.

We have to consider also, that perhaps what prompted the repair is that it might have been fractured by modern handling – but we just do not know. I suppose that what is most frustrating is that someone actually looked at the hole, and quite possibly stared at the interior – something that hadn’t occurred in over 2000 years. They might just have glimpsed the secrets that have remained hidden away for nearly another 70 years, but chose to repair it instead so that all those for whom it would go on to delight, wouldn’t be disappointed with a blemish on its artistic reputation. But by repairing the hole the portal into the interior of the Great torc was closed.

It should be said that this is utterly contrary to archaeological practice these days. An object, such as the Grotesque torc, is displayed as found and not repaired – much to my personal frustration I have to say! It would be wonderful to strip back the layers to see what was really going on. But I do understand why…

But to come back to the original point: no-one was ever supposed to discover the sheet work techniques used to make the torus torcs. They were to be worn and admired. Perhaps this was a specific aim to ensure that no casual admirer might decide to copy it in some nefarious manner and ask a rival to craft an equally stunning example.

For example, it’s plain that the Sedgeford torc was a master class of Iron Age casting but equally, is in both terminals, riven with faults that they felt obliged to mend. One wonders whether whoever made the Newark torc didn’t share the secrets of their perfect making with their rival Sedgeford maker! 😉